Flying over the forbidden district avoiding the fancy ones, the Geto Bird is a police helicopter prowling around the American popular districts. Ice Cube made it a hit, Birdy Nam Nam made it a mix.
After several albums greeted by critics and a French Music Award, their third album called The Defiant Order is a strong way back to the hip-hop and turnatablism roots. Out on Owsla (Skrillex’s label), Birdy Nam Nam show their will to share what Europe has already experienced with the United States, Great Britain, Scandinavia and Japan. The whole world is about to discover their album and its reinvented sound by the current best producers : Skrillex, Pelican Fly, Foreign Beggars, French Fries, Djedjotronic, Club Cheval, Sam Tiba, Jackson Lunatic, Dj Sliink, Maelstrom, Nah Like, Soufien 3000, Ryan Hemsworth, Bambounou, High Powered Boys, G-Vump, Mahdyar Aghajani, Culprate, Breakbot, Crackboy, DVNO and La Femme
From these remixes, the band offers this brilliant Geto Bird Mix exclusively made for your ghetto-blaster ! Eight hands playing with 24 tracks for an age-anchored release.
Performing live they have proven having all keys to unexpectedly blow the audience’s mind just like this 3-millions-views video on Youtube ! Pone, Crazy B, Need and Lil Mike or the 4 Fantastiques could pretend saving the world from their platines. Several times DMC’s (French DJ contest) champions, their live performance are clearly coming from another galaxy. 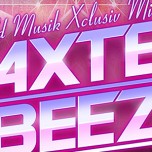