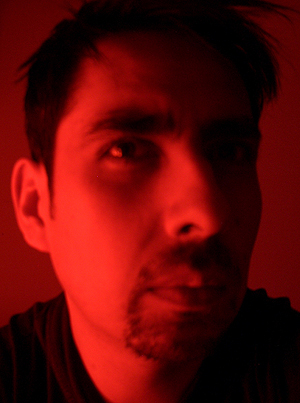 I am a Graphic Designer and Digital DJ (Controllerist) from Salzburg/Austria.
I like to play the whole range between heavy Electro, Dubstep and Glitch Hop!

My blog reports beside my work as DJ and Designer about the music and artists I like, about other graphic and motion Designer and some other stuff that inspires me.

My personal definition of the word „Metatron“
Meta is a prefix, which indicates change or alternation, or signs a statement on a higher level than the current, a so called “meta-level”. Tron stands – in my case – for “electronic music”.

Short Biography
The Metatron is a real all-rounder – alongside his love of graphic design, he is also a video editor, the mastermind behind various projects and above all a huge music addict. He started as a DJ in the mid-nineties and was a founding member of the legendary “Steinklang Records Shop” in Salzburg/Austria. Electronic music of every description, especially dance music, has influenced his life for as long as he can remember. He was shaped by Wave, EBM, Indie and Electro-pop from the late 70s and early 80s and was a pioneer of the fledgling techno-movement in Austria. He was also a founding member and photographer for the Techno Fanzine “Spacematic” and at the same time started his DJ career as a Techno and then a Hardcore DJ. His first alias as Hard- and Speedcore DJ was “Punisher”, followed by “Daimon Hellstrom”.

2005 he changed his name to “The Metatron”! The Metatron began his career as a party organizer and DJ focusing on Electro inspired by “Justice” and the whole “Ed Banger/NuRave scene. The first major project he organized was a party called “Ballroomblitz” – A unique and colorful party with two amazing female live acts from Germany, Näd Mika and Sarah Walker.

2008 saw the dawning of a new era. The Metatron produced his first “Skitzo Disko” mix-tape for the Online Community and started a party series with the same name. After a few parties with various DJs from Germany and Austria and fantastic bands from Germany such as Monosurround and Transformer di Roboter, he quit party organizing business because Salzburg was just not the right place for his line of parties! Anyway, the show must go on, so he decided to focus on his mix-tape series on the web for his international friends. The Skitzo Disko mix-tape series has a strong concept and The Metatron spends a lot of time over his song selection. Most of the tracks are vocal with a typical song-character, which he then mixes like techno-tracks. Every Skitzo Disko Volume has a special cover design and its own specific concept and style! He chooses tracks from gifted youngsters and well-known artists to give the listener a unique listening experience! Various radio stations and blogs around the globe have featured his mix-tapes. He sometimes makes mix-tapes upon request for radio or blogs.